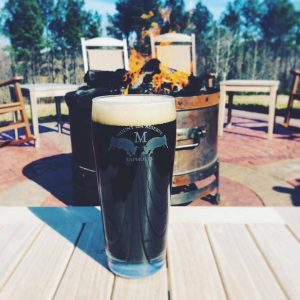 Dark, roasted, and full of flavor, stouts derived from Porters on the beer family tree around the late 1670’s. The term “stout” was originally used to describe a stronger porter. This practice continued until Arthur Guinness began his famous namesake brewery in 1795, where the evolution of the stouts, and specifically dry-Irish stouts, began. The recipe for the classic Guinness Stout in circulation today was created in 1840.

Dry-Irish stouts are noted for their dark color, roasted coffee notes, and their sessionable ABV percentages (the highest being 5% ABV). The Wicked Cool Southie Stout recently tapped at our Tasting Room, and was made from 100% of our farm grown Violeta barley. Locally kilned at Murphy & Rude Malting Co. of Charlottesville, we used raw roasted barley in the brew to give it the roasted coffee flair. At only 3.5% ABV, this stout is light with a medium mouthfeel that pairs well with just about any dish you can have! We’re excited to see it paired with Chef Nathan Hatfield’s Irish brown bread (that he learned to make while in Ireland), at the St. Patrick’s Day Pairing Series with our Beverage Manager Stephanie! Make sure to buy your tickets in advance!