Autumn is officially upon us here in the Blue Ridge! To complement the cool weather rolling in, we will be featuring, for the month of October, the biggest and boldest red on our wine list; our 2017 Mount Pleasant Tannat. Tannat is characterized by heavy tannin, and our limited production single varietal does not stray from the norm, making it a perfect cellaring wine. This beauty will reach its prime with at least 5 years of aging. 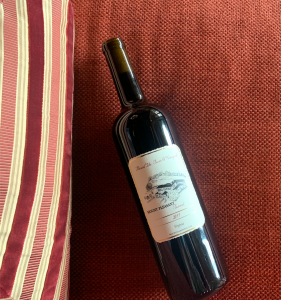 Tannat is a dark red grape with origins in Basque country, between France and Spain. Primarily found there near the Pyrenees mountains, where the terrain is very rough and rugged, it is no surprise that this thick skinned grape should produce wines that are equally deep, rich, and dry. A French Tannat is known to be characterized by a firm, tannic structure and bright raspberry aromas.

In the 19th century, the grape was brought to Uruguay by Basque settlers, where it quickly began to flourish. Tannat is now considered the “champion of Uruguayan wine” and also grows prevalently all over South America. The grapes grown in Uruguay and surrounding areas in South America tend to be more elegant than their French counterparts; with softer tannin and notes of blackberry.

In the late 19th century, Tannat made its way to the United States via the University of California, Berkeley’s agriculture department (often the source of grape transplants on our continent). West coast Tannat tends to mimic the characteristics of the classic French wine. 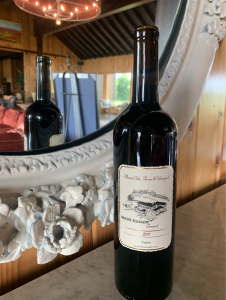 In Virginia, Tannat is typically produced as a single varietal wine though it also shines in a blend. Many wineries in the area will use this robust varietal for a dessert wine; the sugars mellowing the intense tannin and smokiness of the fruit. For our 2017 vintage, we stayed very very dry, allowing the grape to showcase its classic structures and flavors. Aged entirely in neutral French oak, this wine is big, dark, and powerful with notes of a very dry Port wine. This limited release will only be around for a short time; we produced a little over 100 cases. With the aging potential of this gorgeous red, you’ll want to be sure to take advantage of our Wine of the Month discount and take a case home to enjoy for years to come!