Wine of The Month: 2018 Cabernet Franc

We are reaching the end of summer but not quite yet into the cool weather of fall. By the end of August, all of us are ready for those cool fall breezes to arrive. As we look forward to autumn, and hopefully to encourage that weather to come a little earlier, we are featuring our 2018 High Ridge Cabernet Franc as our September Wine of the Month! A lovely, flavorful Cab, our 2018 vintage is on the lighter side; a perfect companion to the last of the warm weather we can expect from a September in Virginia. 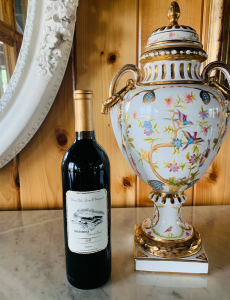 Cabernet Franc is, as the name would suggest, native to France. It is thought to have originated in the Libournais (Bordeaux) region of southwest France sometime in the 17th century when cuttings were transported from there to the Loire Valley and give into the care of an abbot named Breton (to this day, some in the Loire Valley still call Cabernet Franc “Breton”). While Cabernet Sauvignon rose in popularity ahead of Cabernet Franc (leading many to believe it predated Franc) a DNA study of the two grapes completed in 1997 showed that Cab Sauv was actually a product of Franc being crossed with Sauvignon Blanc! Cabernet Franc is now grown all over the world, from Europe to South America, Canada, and both the west and east coasts of the United States. In Virginia, Cabernet Franc is known to thrive and has come to be known as one of the top red varietals grown in our own Monticello wine region.

Our 2018 Cabernet Franc is comprised of 91% Cab Franc and 9% Cab Sauv and aged in both neutral (72%) and new (28%) French oak; spending a total eight months in the barrel before going into bottle. A lighter red due to the cooler and rainy 2018 season, this wine has a bouquet of freshly cracked black pepper and a mellow mouthfeel. Smooth on the palate with notes of red fruit, tart cranberry, and a lively touch of acidity. The lightness of this Cab lends itself perfectly to the end of the summer season; not too heavy but beautifully balanced and full of flavor.

Visit us at the Tasting Room during the month to sample by the glass and take advantage of our Wine of the Month case discount!