Supermoon IPA and the evolution of West-coast style IPAs 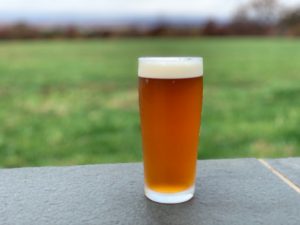 India Pale Ales (IPAs) originated during the expansion of the British Empire. Traditional cask English ales were unable to make the long journey from England to the colonies of India; as a precaution to preserve the flavor and freshness of the ales, an abundance of hops were added to the casks. The American craft beer scene began to gain traction in the 80’s and early 90’s, where breweries began to revitalize the traditional European beer styles including IPAs. American style IPA’s organically grew in popularity, creating a wide variety of sub-categories to define new versions of the classic IPA. West-coast IPAs are known for their predominately citrus and floral flavors, and being driven by hops rather than malt character. With a medium bodied mouthfeel and a crisp finish, West-coast style IPAs tend to be higher in alcohol (6-8% ABV).
Our West-coast style Supermoon IPA is a part of our rotational IPA series here at Mount Ida. Brewed using our farm-grown Violetta barley, each variation of Supermoon will be slightly different. Recently tapped is our current Supermoon .992, with notes of fresh pine, resin, and citrus. The number is indicative of the most recent Supermoon seen in the sky, with the .992 distance in light years between the moon and the Earth!