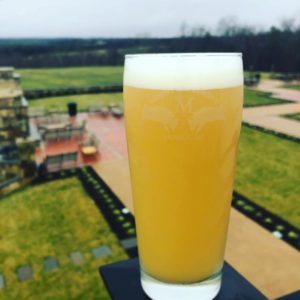 India Pale Ales originated in the early-mid 19th century during British colonialism. Used as a preservative of their traditionally bitter beers, hops were added to ales in order to transport casked beer from England to the far reaches of the India colonies. Known for their floral aroma and grassy earth flavors, there are many different styles of IPA out there.
New to the scene in the early 2010’s, the New England IPA style came as a competitor to the super hopped and floral West Coast IPA. Known for their unfiltered hazy appearance, NEIPA’s tend to be described as “chewy” or “juicy” and full of fruit-forward flavors. They rose to popularity in part from The Alchemist, a Vermont craft brewery, with their Heady Topper, an unfiltered double IPA. Soon other local New England breweries created their own versions, and the beer style took off!
Our “Old Ironsides NEIPA” is named after the USS Constitution (commonly known as Old Ironsides based on its construction). The tall ship was constructed at Charlestown Navy Yard in Boston, Massachusettes, and is the world’s oldest commissioned naval vessel still afloat. Keep an eye out for this hazy and delightful beer, dry-hopped with Columbus, Chinook, and Cascade hops.