How to Saber Champagne! 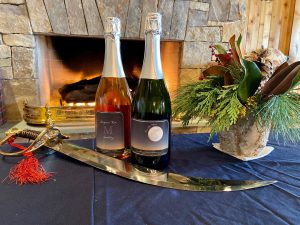 Opening a bottle of Champagne will always give off a sense of excitement with the quiet pop of a cork. While showy, and usually reserved for celebrations, using a saber to open a bottle has been in practice for centuries.

The practice is believed to have originated in France during the reign of Napoleon Bonaparte. He was often quoted as saying “Champagne! In victory one deserves it, in defeat one needs it” as he loved the bubbly wine. Napoleon’s soldiers often would return from battle to the public throwing bottles of Champagne in celebration. While on horseback, opening bottles were quite difficult, and after one soldier’s successful attempt, others would use their sabers to slice open the bottles.

While there are many rumors and myths that circulate the beginnings of sabering Champagne, they consistently tie back to Napoleon and his men. For anyone who wants to try this at home, please follow the following steps for a safe and successful sabering:

-Always keep the bottle pointed away from you and others!

-Remove the foil from the bottle

-Find the seam that runs along the length of the bottle

-Using a dull blade, slide it carefully along the seam to find the spot where the blade will meet the lip of the bottle at a 30-45 degree angle

-In one sweeping motion, push the blade straight following the seam

Congrats! You have now sabered a bottle of bubbly!